Pimoroni Touch pHAT. You get 6 touch buttons to use for anything. Each of the buttons is also equipped with a light white LED. You can even use a dry erase pen to write on the pads to label their function.

Only 5 left in stock

It uses the CAP1166 capacitive touch and LED driver chip. The LEDs have been under-mounted and shine through exposed sections of the PCB to give a pleasing yellow-green glow and a completely smooth top surface!

Use Touch pHAT as a controller for your robot, a tiny drum machine, or use it to build a simple game where you have to taps the buttons to repeat the sequence of lights that just flashed.

Be the first to review “Touch pHAT” Cancel reply 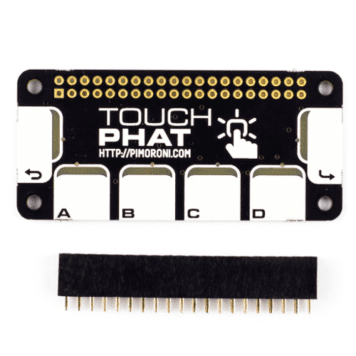