Ideal for a mini-CCTV system. This set has horizontal and vertical motion servicing that gives you super smart motion of your Pi Camera.

If the product is on backorder: no guaranteed date of shipment.

Pan-tilt HAT allows you to mount and control your Raspberry Pi Camera on top of your Raspberry Pi. The HAT and its built-in microcontroller allow you to independently run the two (pan and tilt) drives, as well as running up to 24 regular LEDs (with PWM control) or NeoPixel RGB (or RGBW) diodes. There is also a convenient tunnel through which you can route servo, LED and camera cables. The module pans and flips 180 degrees in each axis.

Pan tilt module (180 degrees movement in each axis) with two servos
HAT with two servo channels, a PWM or NeoPixel RGB (or RGBW) LED channel
Right angled header, soldered to the underside of HAT for servo and LED channels
Slot to route servo, LED and camera cables through
Acrylic mounting to hold Pi camera and NeoPixel strip (with diffuser) in place
Compatible with Raspberry Pi 3, 2, B +, A +, Zero and Zero W
Python Library
Comes fully assembled
Guide to collecting

Be the first to review “Pan-Tilt HAT” Cancel reply 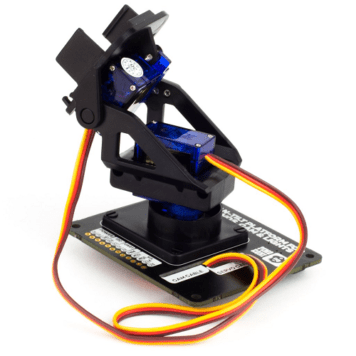