The PiTray Mini is a ‘Model B format’ carrier board for building a cluster or similar projects with the Raspberry Pi Computed Module 4  (CM4).

The PiTray Mini focuses on providing a neat and budget solution for CM4 applications. With the same outline and mounting holes as the Raspberry Pi Model B, it can be stacked upon the existed cluster.

The CM4 has some advantages over Raspberry Pi 4B within industrial applications. The variants which embed eMMC storage offer much more reliable and faster disk I/O. At the same time, since the CM4 provides models without WiFi and Bluetooth, a cluster can be more efficient in energy consumption.

Cluster builders looking for a minimal layout with solid module mounting with powering and Gigabit Ethernet. PiTray Mini offers it all!

Moreover, the PiTray Mini acts as a good starter kit for the CM4. For CM4 variants with eMMC, there is an eMMC boot switch on board that makes it a lot easier to flash an Operating System image to the eMMC – no need to spend time figuring out which pins should be connected! It also includes a micro SD card socket to support the CM4 Lite (without eMMC – requires a micro SD card).

To fit the Compute Module 4 on such a small business card size carrier, the PiTray mini does not include DSI, CSI sockets, audio jack, dual micro HDMI or USB3.0 hub because they are seldom applied in cluster building. Instead, it provides only one USB2.0, full-size HDMI, and HAT connectors that come natively from the chip. 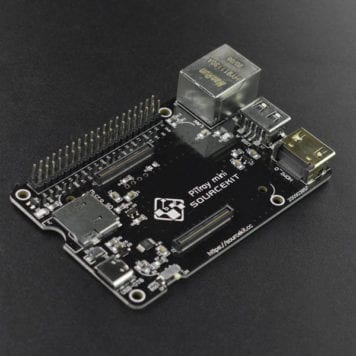