View cart “ZIP LEDs Add-On Pack for Kitronik Inventors Kit for micro:bit” has been added to your cart.

Explore codable lighting with our ZIP LED add-on for the Kitronik Inventors kit for the BBC microbit and learn ways in which LEDs might improve your projects.

This add-on pack for the Kitronik Inventors Kit for the BBC microbit provides the perfect way to learn about the wonderful world of ZIP LEDs. These LEDs are simple to control and can be used to produce a whole range of fantastic colours.

Most consumer electronics heavily rely on LEDs, as LEDs are a great way of providing instant visual feedback for the user. With this add-on pack you will learn how to write code to take control of ZIP LEDs and also learn how to make ZIP LEDs respond to input from components such as potentiometers and sensors. There are ten experiments, 9 in the booklet and one online, that will help you develop the skills needed to add visual feedback to your projects.

ZIP LEDs are individually addressable RGB LEDs. The name is a nod to the ZIP postal codes used in the US. Each LED can be controlled independently and all LEDs are connected using the same three wire bus. Each LED can produce a full spectrum of colours, independently of other LEDs on the same bus.

ZIP LEDs are based on the WS2812B part and are often referred to as NeoPixels (which is an Adafruit trade mark) and are compatible with Adafruit NeoPixel and other WS2812B driver code. They can be coded for the microbit in both MakeCode Blocks and MicroPython. 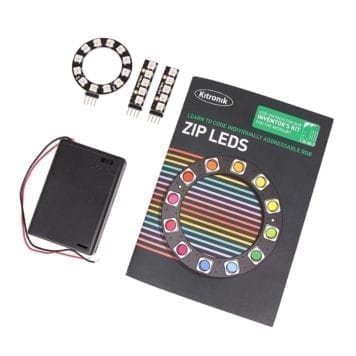